Waffles have always been a treat.  Growing up, they were an occasional pleasure, the pimped out Cadillac of breakfast foods.  The pancake’s fun and fancy big sister.  They were also made on a 1970s cast iron combination griddle and waffle iron that was guaranteed to make the first batch stick with the type of enthusiasm that obliterated Mummy’s interest in continuing the process.  And clean-up was a bitch.

Living on my own, I secretly coveted a waffle iron, but settled for investing in more pragmatic appliances.  Toaster oven, whoo hoo.  Last year, the fella’s mum presented us with a giant waffle iron.  I was ecstatic.

“Wow, a waffle iron,” his niece intoned, with typical late adolescent sarcasm and the ignorance of one who still lives at home with a built-in mealmaker.  I bit my tongue (and filed the incident away for later blogging) and broke out the batter the very next day.  They were a little dry,  but did what waffles do best: offer up a tasty grid designed for maximum fat and syrup storage.

Fast forward to Friday, when I stumbled across my new favourite recipe, below.  I found this recipe at Go Dairy Free, and made a few Hard Headed adjustments, like adding spices and vanilla, because life is more fun with cinnamon and sweet, and using all whole wheat flour, because white flour is basically a waste of time and I never keep it in the house.

Apparently they are called “Naked Vegan Waffles”.  I’m sure there’s a fun story in there, but I was hungry for waffles, so didn’t read it.  Perhaps because they’re a good, basic waffle?  In any event, I’ll probably just refer to them as “waffles” when I make them.  Mostly because early morning references to nudity can be awkward.  And the words “Naked Vegan” put together might falsely raise the expectations of those I’m making breakfast for. 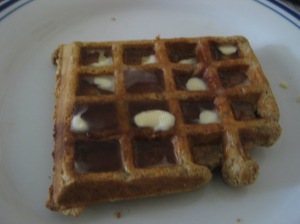 3. Add dry ingredients to wet, and stir gently until combined.

4. Cook in waffle iron, about 5 minutes.

I laid mine down with Earth Balance and maple syrup.  I would have had Soyatoo Soy Whip with it, just for fun, but forgot to take the can out of the freezer in time.  Also, we may have decimated the supply in two earlier waffle-based feasts.

I know the picture isn’t the best, but it’s a very tasty waffle.   It’s challenging to take a painstaking, loving photo when you really just want to down breakfast while it’s hot.

And finally, you can check out the original recipe here.