I don’t often cook from cookbooks.  Which is a shame, since I have a beautiful and growing library cookbooks that are vegan, vegetarian, and not remotely vegan but willing (or forced) to be adapted to my tastes.  Cookies, cakes, pastries, pies?  I need a recipe’s guidance.  When it comes to savoury, I do a quick google search if I need ideas or guidance, or just wing it.

This week, I decided to change that.  Last week, I’d attempted to recreate those tasty Greek potatoes you get at, well, Greek restaurants.  Tender, creamy, zesty chunks of starchy goodness.  I don’t eat Greek food often (not for any particular reason, it’s just not a cuisine I seek out often, tasty though it is when I do), but the one thing I remember from the last such meal I had is those potatoes.

Well, I did my usual google and wing thing, and the potatoes turned out adequate, but neither moist and tender nor slightly crisp and golden.  They weren’t horrible, but the word ‘bland’ might not be entirely inaccurate.  I admitted defeat, and turned to my library. 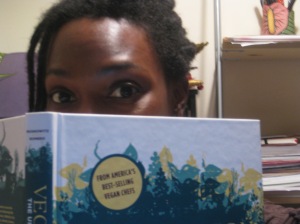 Hmm, what have we here? Advice? Help?

Turns out, Veganomicon, by Isa Chandra Moskowitz and Terry Hope Romero, has a recipe for Lemony Roasted Potatoes.  I decided to give it a try, and my verdict is, oh yes, yes indeedy, and yes please.  I loved it enough  to do what I’d never done to one of my cookbooks before.  I dog-eared the page.

Since I’m cooking for two, not four, I halved the Veganomicon recipe, so bear in mind that the original is double this, to serve 4-6:

I’ve paraphrased the instructions.  Basically, you cut the potatoes into wedges, combine the ingredients except the fresh parsley or optional additional dried oregano, toss in a dish, cover with a lid or foil, and shove into a 375 F oven.  Stir them a few times while baking, and bake 30-35 minutes, then remove the covering and bake another 15-20 minutes until most of the liquid has evaporated.  Before serving, sprinkle with the optional parsley or extra oregano.

I tried to limit my hardheadedness, but couldn’t resist a few tweaks.  As noted in the ingredients list, I cut down on the salt and just added a sprinkling.  Even though the veggie broth (or, well, bullion cube rehydrated to veggie broth) I used was a low sodium one, half a teaspoon of salt seemed a bit more than needed, especially with the assertive lemon juice out to play.  I didn’t have tomato paste (I never do; recipes always seem to call for tiny quantities, and the rest ends up festering in the back of the fridge) so I used the organic ketchup I did have on hand.  And the rosemary…well.  When lemon and roasted potatoes are on the books, it seems wrong not to break out the rosemary.

The end result was really quite nice.  The taters browned up just a bit, but retained moisture; next time I’ll take them out at the 15 minute mark, rather than 20, and save a few more of those delicious juices.  If you’re fat conscious, I would imagine you could reduce the olive oil a little, as long as you leave enough that the potatoes will get that golden, oven-fried touch in the final minutes of cooking.  The potatoes do take about an hour to prepare and bake, but are low maintenance, and worth the wait.  So thank you, Isa and Terry, for the tasty treat!