Well, I didn’t mill the flour myself, and I used Daiya, not a homemade ‘cheese’ or similar topping, but the dough and that tasty bright red sauce?  All me, baby.

Breadbaking hasn’t been my strong suit since moving to the cold, distant north.  I learned to bake bread in the tropics, where dough springs to life eagerly in the hot, humid climate.  I derived endless glee from coming into the kitchen to find Mummy’s bread dough shoving aside its plastic cling film cage so its burgeoning bulk could breathe free.  If we had to step out on a baking day, we’d joke that we’d come back home to find the over-risen dough greeting us at the front door.

Fast forward to five years ago.  I’m living in a shoebox of a studio on 12th and Burrard.  Already small house, shoddily converted into dinky apartments with such special features as ‘vintage’ radiators (i.e. expensive and inefficient), magic leaking holes that transferred second floor shower water onto first floor kitchen tables, and an abysmal old gas stove that operated on three settings: off, on the way to 500 degrees, and 500 degrees.  More on that stove later.  One winter evening I decide, at about 7pm, I *need* cinnamon rolls.  I find a recipe purporting a 4 hour preparation time.

Four hours later, the pathetically under-risen dough wads emerge from the oven (probably at a cool 485, thanks to my special temperature control method of propping the door slightly open with the aid of a chair).  The wads are binned, along with my hopes of ever dealing with yeast again. 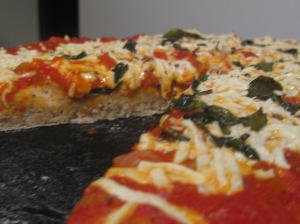 Yes, I know pizzas and cinnamon rolls are not exactly synonymous, but that diminishes the victory for me not at all.  If you, like me, have shied away from baking yeast-based treats for fear of failure, I urge you to try it.  Pick an evening when you have plenty of time, start the crust first, and prep the roasted red pepper sauce in the rising and resting times.  The original pizza crust recipe is by Girlversusdough, who posted the recipe on Tablespoon.com.  I made the usual couple of customizations to meet my own needs: oat flour in place of some of the whole wheat; resting time after mixing, but before kneading, the dough; and baking the finished product at a lower temperature, and on a tava instead of a pizza stone.

1. In a small bowl, combine yeast, water, and 1 t sugar.  Let sit 5 minutes.  The yeast should fluff up, showing that it’s active.  If your yeast doesn’t fluff, it’s inactive.  Go get a fresh batch.

3. With a spoon, stir until dough just comes together.  Cover and let rest 10 minutes.  When working with whole wheat flour (which is the only wheat flour I ever use), this pre-kneading resting period helps form a softer end product.

4. Fit stand mixer with dough hook attachment and kneed 3-4 minutes, adding remaining 1/2 c whole wheat flour in 1 T increments until dough pulls away from sides of the bowl, or is no longer sticky.

5. Shape dough into a ball and place in a lightly greased bowl.  Cover with a lightly greased plate and leave to rise in a warm, draught-free place until doubled, about 45 minutes to 1 hour.  Move on to making your sauce now.

1. Heat oil over medium.  Add onions and sautee until just translucent.
2. Add minced garlic cloves and cook until onions and garlic are just starting to brown.
3. Add pureed peppers, and bring sauce to a gentle bubble, keeping heat at medium.  Season to taste with salt.  I used very little as I wanted to let the sweetness of the peppers shine through, and as I knew I’d be using Daiya on the pizza, which is fairly salty.
4. Cover and simmer 7-10 minutes on medium low.
5. Remove from heat and set aside until ready to assemble pizza.

2. Punch down risen dough, shape into a ball, and place onto a lightly floured cast iron tava.  Roll out to your desired thickness–I rolled my dough right out to the very edges of the tava.  Let rise 10 minutes.

3. Top pizza dough with the Roasted Red Pepper Sauce and Daiya shreds.  Tear basil leaves and scatter over the top, then sprinkle with fresh-ground black pepper.  Lightly drizzle the olive oil over the top.

4.  Once 10 minutes is up, check that your oven is at or near 450 F.  Over medium stovetop heat, cook the pizza on the tava for 2 minutes to give it a head start.

9. Place the pizza in the oven and bake 10-15 minutes, or until crust is golden and toppings are nicely melted and just starting to brown.

10. Remove from oven and let cool on tava for about 10 minutes.  Slice and devour. 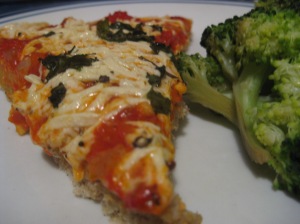 Fella usually participates very reluctantly in my special new-recipe-gauging system (aka “What would you rate this meal, on a scale of 1-10).  After a full-mouthed muttering of “Delicious!” and a further devouring of several eager bites, he volunteered a never-before-given 10.  I actually really enjoyed it too.  I’d bake it for slightly longer (I went with 10 minutes) next time to get a slightly crisper-bottomed crust, but them’s small things.